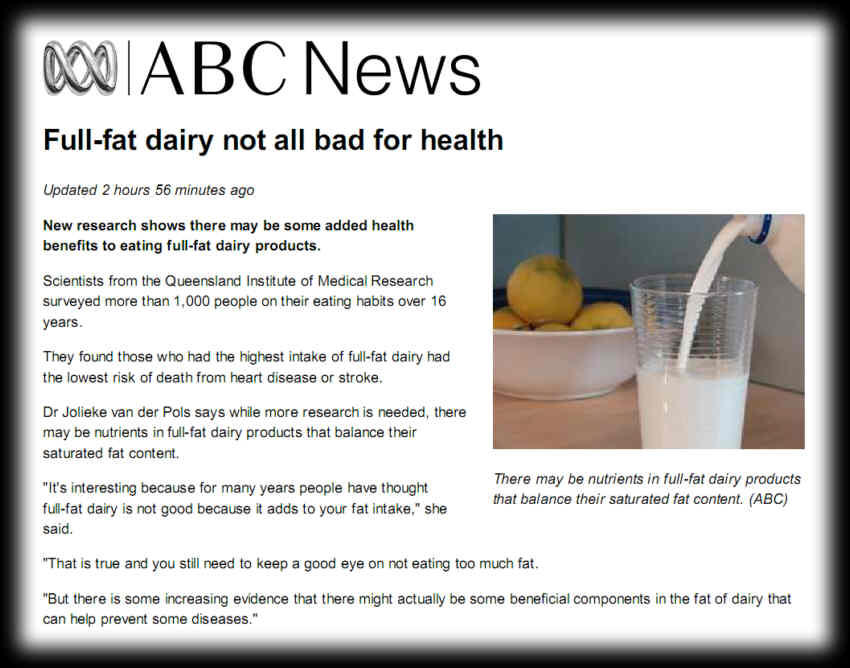 No Skinny Lattes for Me, Thanks.

We all want to live for ever, don’t we? (In practice, when you think about, probably no one does really, but most of us would prefer to put off the unpleasant event for the foreseeable future.) With this in mind, just how often have you gone with some health conscious friend for a coffee and they have insisted on one made with low fat milk or, horror of horrors, soy substitute?

Evidence is accumulating that the current conventional idea on the health benefits of avoiding saturated fats is likely to require major revision.

As just one example, the ABC news item from August 10, 2010 (above) failed to draw the attention the item deserved.

I am not going to make any specific comments on the content of this ABC report since I have not read the actual scientific publication from this study and since I have certain level of disrespect for the quality of contemporary journalism (although the ABC is much better than most!)

However I suggest you keep it in mind along with another report from the Scientific American web site quoted in full below.

I have copied the content in full rather than supplying a link since I do not know just how long these articles remain current.

Just read it for yourself and think about it. Also keep reading for yourself and treat everything you read, including this) with a degree of healthy skepticism. However, it is likely that, in the next decade or so, dietary recommendations are likely to be subject to major revisions.

Carbs against Cardio: More Evidence that Refined Carbohydrates, not Fats, Threaten the Heart

Eat less saturated fat: that has been the take-home message from the U.S. government for the past 30 years. But while Americans have dutifully reduced the percentage of daily calories from saturated fat since 1970, the obesity rate during that time has more than doubled, diabetes has tripled, and heart disease is still the country’s biggest killer.

Now a spate of new research, including a meta-analysis of nearly two dozen studies, suggests a reason why: investigators may have picked the wrong culprit. Processed carbohydrates, which many Americans eat today in place of fat, may increase the risk of obesity, diabetes and heart disease more than fat does—a finding that has serious implications for new dietary guidelines expected this year.

In March the American Journal of Clinical Nutrition published a meta-analysis—which combines data from several studies—that compared the reported daily food intake of nearly 350,000 people against their risk of developing cardiovascular disease over a period of five to 23 years. The analysis, overseen by Ronald M. Krauss, director of atherosclerosis research at the Children’s Hospital Oakland Research Institute, found no association between the amount of saturated fat consumed and the risk of heart disease.

The finding joins other conclusions of the past few years that run counter to the conventional wisdom that saturated fat is bad for the heart because it increases total cholesterol levels. That idea is “based in large measure on extrapolations, which are not supported by the data,” Krauss says. One problem with the old logic is that “total cholesterol is not a great predictor of risk,” says Meir Stampfer, a professor of nutrition and epidemiology at the Harvard School of Public Health. Although saturated fat boosts blood levels of “bad” LDL cholesterol, it also increases “good” HDL cholesterol. In 2008 Stampfer co-authored a study in the New England Journal of Medicine that followed 322 moderately obese individuals for two years as they adopted one of three diets: a low-fat, calorie-restricted diet based on American Heart Association guidelines; a Mediterranean, restricted-calorie diet rich in vegetables and low in red meat; and a low-carbohydrate, nonrestricted-calorie diet. Although the subjects on the low-carb diet ate the most saturated fat, they ended up with the healthiest ratio of HDL to LDL cholesterol and lost twice as much weight as their low-fat-eating counterparts.

Stampfer’s findings do not merely suggest that saturated fats are not so bad; they indicate that carbohydrates could be worse. A 1997 study he co-authored in the Journal of the American Medical Association evaluated 65,000 women and found that the quintile of women who ate the most easily digestible and readily absorbed carbohydrates—that is, those with the highest glycemic index—were 47 percent more likely to acquire type 2 diabetes than those in the quintile with the lowest average glycemic-index score. (The amount of fat the women ate did not affect diabetes risk.)

And a 2007 Dutch study of 15,000 women published in the Journal of the American College of Cardiology found that women who were overweight and in the quartile that consumed meals with the highest average glycemic load, a metric that incorporates portion size, were 79 percent more likely to develop coronary vascular disease than overweight women in the lowest quartile. These trends may be explained in part by the yo-yo effects that high glycemic-index carbohydrates have on blood glucose, which can stimulate fat production and inflammation, increase overall caloric intake and lower insulin sensitivity, says David Ludwig, director of the obesity program at Children’s Hospital Boston.

Will the more recent thinking on fats and carbs be reflected in the 2010 federal Dietary Guidelines for Americans, updated once every five years? It depends on the strength of the evidence, explains Robert C. Post, deputy director of the U.S. Department of Agriculture’s Center for Nutrition Policy and Promotion. Findings that “have less support are put on the list of things to do with regard to more research.” Right now, Post explains, the agency’s main message to Americans is to limit overall calorie intake, irrespective of the source. “We’re finding that messages to consumers need to be short and simple and to the point,” he says. Another issue facing regulatory agencies, notes Harvard’s Stampfer, is that “the sugared beverage industry is lobbying very hard and trying to cast doubt on all these studies.” Nobody is advocating that people start gorging themselves on saturated fats, tempting as that may sound. Some monounsaturated and polyunsaturated fats, such as those found in fish and olive oil, can protect against heart disease.

What is more, some high-fiber carbohydrates are unquestionably good for the body. But saturated fats may ultimately be neutral compared with processed carbs and sugars such as those found in cereals, breads, pasta and cookies. “If you reduce saturated fat and replace it with high glycemic-index carbohydrates, you may not only not get benefits—you might actually produce harm,” Ludwig argues. The next time you eat a piece of buttered toast, he says, consider that “butter is actually the more healthful component.”

The above article is copyright to Scientific American.